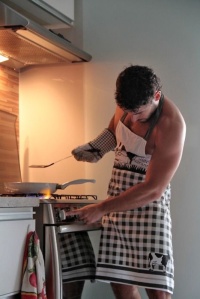 Food? I’m a fan. I’ve got no issues with cooking for myself. I like to cook. First meal I served to my bitch mistress, Macie Fitzgerald, sure surprised her. Hey, she had few surprises for me too—in the kitchen, hallway, den, her bedroom… But that’s another story.

10.  I have to be desperate to cook up a batch of lasagna, but the good thing is, when I do, I have enough for four meals. That stuff freezes great. You can use bottled sauce if you want, but if I’m going to make this, I want to do the whole thing. Sometimes I use ground beef, sometimes not. But definitely onions, green peppers, garlic, and diced tomatoes. Throw in the seasoning–fresh herbs if you have them, or dried–but use basil, thyme, oregano, parsley, and a little rosemary never hurt. Or buy the premixed Italian seasoning and add about a tablespoon. Simmer until it’s a smooth, thick sauce, at least an hour. Figure out your favorite—bottled or made from scratch. Don’t skimp on the sauce—you’ll need a lot.

Boil the noodles, rinse in cold water, and set aside with a little olive oil to keep them from sticking together. For a 9×13 pan, mix 16 ounces of small curd cottage cheese with four ounces of grated Parmesan, 2 eggs beaten, and 12 ounces grated mozzarella. (Please, none of this low fat junk.) Add the same seasoning as you used in the sauce, another tablespoon. Spread sauce, then noodles, then cheese mixture, then sauce, noodles and cheese, until you run out of ingredients. End with a layer of sauce, sprinkle with more parm, bake an hour. Open the wine, heat the bread… Come on, I don’t have to tell you that, do I?

9. Jambalaya. I admit to watching a few cooking shows. Rachel Ray knocks it out of the park with her jambalaya recipe—Andouille sausage, chicken, shrimp. Look for it online at the Food Network site. No major production with making roux, or fussing over details. Just cook that spicy baby ‘til your mouth is watering so bad you’re going to burn your tongue not waiting for it to cool. Doesn’t hurt that it’s all one pot—except for the rice. Better the second day, the third day—as long as it lasts, or hell, freeze batches and eat it later. Gotta have crusty bread. A tall cold one earns extra points.

8. Broccoli-Beef stir-fry. Buy sirloin or chuck steak. Stick it in the freezer until it’s almost frozen—that makes it easier to cut thin slices. Slice a cup of green onion and two cups of broccoli. It doesn’t matter if the broccoli is all flowerets. You can slice the stem, too. Depending on how meaty you like it, use 1 ½ to 2 cups of meat. A little green pepper doesn’t hurt, if you like. Put the rice on to cook—I like long grain, organic basmati, but that’s up to you. Mince 2-3 cloves of garlic. Prepare fresh ginger to grate onto the mixture, about a tablespoon. Get some of that paste beef bouillon. Then turn the fire on under your wok or iron skillet until it’s smoking hot. Throw in a little oil, then the beef and onion (and green pepper if you’re using it), sprinkle with salt, and stir until the beef has lost its redness. Then add the broccoli. Keep stirring until it starts to dry up in the pan, then add the garlic and ginger. Stir a bit longer until you really start freaking that the whole mess is going to burn then pour in a cup of water. Careful, it’s going to sizzle. Add another half cup of water, then a level teaspoon of the beef bouillon paste. Stir until fully blended. Let it bubble a couple more minutes. You decide—want your broccoli al dente? Serve now. Like it softer? Put on a lid, reduce heat to low, and wait another five. Killer: garlic-butter croutons on the side.

7.  When I said I liked to cook, did I give you the idea I was into a bunch of fancy composed dishes? Well, forget that. Nothing turns me off a restaurant faster than some tortured stack of mystery ingredients in the middle of a big plate. I want real food. Like baked chicken. Rinse the bird inside and out, pat dry, stuff some celery, sage, and onion inside that baby, rub the skin with butter all over, and sprinkle with poultry seasoning (easy, now, maybe a half teaspoon), salt, pepper, and minced garlic. Put it in a clay cooking pot or cast iron Dutch oven with a cup of water, let it bake for at least two hours at four hundred degrees. (Check at least once to ensure there’s still some liquid in the pan. Add more water if necessary.) If you’ve got room in the pot, add some small onions and fingerling potatoes. Damn. That’s a feast I never found in a restaurant as good as I can cook it at home.

6.  Same principle applies with a beef roast. I like chuck because there’s just enough fat in the muscle to break it down to fork tender. If you’re reading my story Ms. Lizzie Ashworth channeled for me, you’ll get the idea in Book III. Sear in a hot pan til all sides are browned, throw in some onions and garlic, add a splash of sherry and 2 cups water, then cook on low for at least four hours. Last hour or so, add some carrots, potatoes, and more onions if you like. Whole meal in one pan. I never said I liked doing dishes. Unless Mistress makes me. That’s a whole other meal, er, job.

5.  Barbeque ribs—let me say I never cooked any ribs as good as I had in Kansas City. There are too many good places there to single out one. The sauce is smoky, sweet, and spicy at the same time. Meat falling off the bone. Can’t stop eating that shit. Have to wash my hands before I pick up my drink. No way to eat pork ribs without getting messy.

4.  Johnny’s at the harbor in Santa Cruz, California—one of the best grilled fresh, wild-caught salmon fillets I ever tasted. Enough sear on the outside to give it that charred flavor. Insides still moist and flaky, just enough seasoning to compliment the natural delicate taste. Comes with some killer cheesy polenta and seasonal vegetables. Why did you ask me about this? I’m hungry, and it’s ten a.m. Alternate—buy your own salmon, set up the grill or use the broiler, swab with a bit of olive oil, sprinkle lightly with dill, freshly ground black pepper, and kosher salt, and…go!

3.  Okay, I admit that underneath it all, I’m a guy who loves what all guys love. A big juicy cheeseburger is perfection. Oozing with mustard, towering with slices of fresh tomato, onions, and dill pickles, crisp lettuce, a layer of melted cheese, oh damn, a thick burger on a toasted bun stops all conversation. Fries are nice, iced tea or a cold beer—sure, I’ll take it. Not necessary, though. Best possible—fire up the backyard grill.

And my Number One favorite tasty treat:

Cold rain dripping from the eaves. Dead calm woods shrouded in winter hues, dull rust carpet of fallen leaves, bare gray trunks marching off in silent columns into the distance. A thin vapor of mist rises in the valleys as the temperature drops. Waiting now, settled into its long rest, the woods stir only with busy squirrels and occasional passing straggles of deer.

She wrapped her arms tightly across her chest and turned away from the cabin window. The rising shriek of the teapot came to full scream by the time she crossed into the kitchen. Bubbling boiling water steamed into the mug, temporarily floating the tea leaves in the strainer before their gray tendrils softened, relaxed, and drifted to the bottom, releasing their tannins and flavors as they fell. Absently, she jostled the strainer, coaxing more from the leaves, thinking of where he might be at this time of the afternoon, this day.

There had been days like this when they were together, days his truck barreled up the long driveway and he crashed into the house with a wide grin. Rained out, he would say, sweeping her up, kissing her with his face still cold. His Levis littered with sawdust, finish nails clumped in his pockets, he would lead her by the hand to the bedside, where he tugged at her buttons with rough fingers, his cock straining the front of his jeans.

“Mmm, it’s nice and warm in here,” he would say, shoving his hands down the back of her pants, squeezing her buttocks, lifting her against him. And he didn’t mean the room.

Time shifted in segments in those delicious afternoons. Quilts drifted off the bed and piled on the floor, pulled back on the bed and warmed them, sated, as they lay against the mound of pillows. The fire died down. He would go, naked, and crouch before the big cast iron stove to peer in at the coals, stir them around, pile in more wood. He would detour through the kitchen, ask about the pot of soup or chili, or the chicken or roast in the oven, all the while stirring and forcing off a bit to taste.

He’d return with wine and a sheepish grin, a telltale smear of chili at the corner of his mouth. They’d talk about their lives, what they remembered, how they felt, what they wanted, hoped for. Evening would drift across the land, deepening in the woods with the thickening mist.

In the last traces of daylight, he’d dress, venture out to carry firewood, to check on weather, inhale the scent of sizzling beef fat as it escaped into the night air. It pleased him to face the cold then return inside to savor the nest he had made for himself, for her, this tidy cottage in the woods where they could live their lives together.

The strainer dripped tea on the counter as she stood again at the window. The place where he had parked his truck had long since sprouted thickets of grass, undergrowth. Only her tire marks kept the drive marked, cleared, to the place her car sat now. Her old gray cat rubbed against her legs, a reminder that time had marched on, moved, escaped in afternoons like this one, until a whole new year, a new decade had arrived without her noticing exactly how. When. 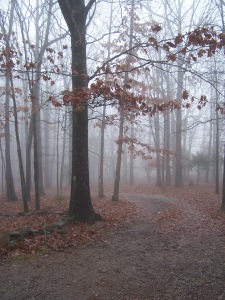