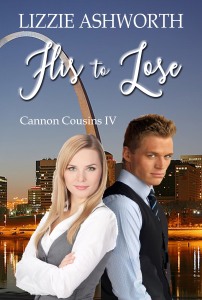 Riley Montgomery harbors a secret desire to explore her dominant side with Dan Cannon, maybe not such a great idea because he’s already exerted his powerful dominance with her best friend Lucy. But as he struggles with embezzlement fallout at Cannon Company, his stress levels keep going up. She thinks her idea will help him.

Her instincts might be wrong. If so, her outrageous plan could ruin everything. Can she stop herself from putting Dan in cuffs?

Dan Cannon’s life is a slow-motion catastrophe with unending crises at the family construction company. He suffers unending torment in his feelings for Riley Montgomery, a woman he’d love if things weren’t so damn complicated. He can’t ask that much, not after watching his first marriage go down in flames.

Once the company lands its biggest job ever with a massive project along the Mississippi River waterfront, Cannon Company reels under a barrage of attacks. Who’s behind these hate-fueled attacks? The last thing anyone expects is a life-threatening kidnapping and the uncovering of a drug cartel operating under their noses.

The website of Luther M. Siler, author of fictional things