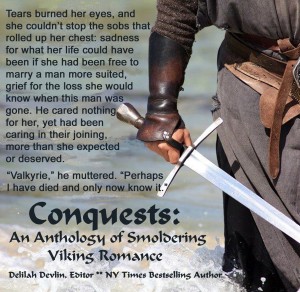 Vikings. Fierce warriors who terrified all in their path as they raided and marauded, enslaved and murdered during Europe’s Dark Ages. But these rough men from a rugged land were also sailors, explorers, craftsmen, and highly sought after mercenaries.

Conquests: An Anthology of Smoldering Viking Romance will transport you to the realm of fantasy where such fearsome and loyal men are relentless potent lovers. Whether the lady of the keep demands a few stolen hours of pleasure with a captured Viking warrior or the handsome Northman is the one seducing his captive, you will find plenty of lusty adventures in settings as far-flung as Ireland, Iceland, Norway, Byzantium, Moorish Spain and the New World.