I’m deep into the second novel of my Roman story of Caerwin and Marcellus. Everything I do is seen from the perspective of 50 AD Rome, which is kind of disconcerting when you’re driving down the highway. Anyway, I thought you might enjoy a snippet of the work as well as a few observations about writing historical fiction.

Research is at the heart of any historical fiction. Without details of place, dress, and social customs, an author can’t create a believable story. Unfortunately, the further back you go in time, the harder it is to find information. For my current research on Rome, I’m regularly frustrated by gaps in the record. I want the story to be as accurate as possible. How do I know if I’ve got the right information?

I confess. Without Google searches, I’d have to fold up my tent and go home. One thing I’ve learned, though, is not to take one Google search as the whole story.

For example, one academic source insisted that women in Rome did not drink wine. Initially, I found a few other sources that affirmed that information. Then I uncovered a new more specific historical survey that explained the wine thing.

Yes, in early Rome, in the nearly six hundred years of its early formation and its existence as the Roman Republic, the Senate made laws and oversaw government operations. Conservatism ruled the day. But in the mid-first century BC, Julius Caesar wrested control from the Senate (for which he was assassinated) and became the first emperor of the Roman Empire. Another four hundred years would follow under the rule of emperors.

Social norms relaxed in the empire. Wine-drinking for women was no longer a crime punishable by death. Whew!

Notoriously, the empire also saw sex scandals, blood sport in the arena, and other excesses which have become the hallmarks by which most of us remember Rome.

As an author, I want to entertain readers with compelling stories about fascinating people. But I also want my stories to reflect the truth about those times. This means the work takes longer. Sometimes hours, days, even weeks elapse as I try to uncover some obscure detail. I’m hoping for a late summer release on the book.

We might have guessed that a warrior culture destined to conquer the known world would produce some hot bodies. All those marble statues were trying to tell us something. Now researchers have learned that the original marbles were painted with lifelike colors and features.

The colors are not being arbitrarily added–a combination of ultraviolet, infrared and X-ray spectroscopy can apparently divine the approximate hues these statues were painted in. Personally, I like the one on the left. (More info here.)

Here’s an excerpt from my current work in progress, a continuation of the story of Caerwin and Marcellus. In Book I, released last November, Caerwin is taken captive by Marcellus as his Roman legion crushes her native tribe in Rome’s quest to seize Britannia.

Caerwin and the other women waited in the carriage. Outside her window, she watched Marcellus. The baggage wagon had pulled forward so that both conveyances waited in the shade of tall trees. A cluster of taverns and eating places lined the wide roadway.

Antius attended Marcellus who stood fully in her view outside the front of the carriage as he began divesting himself of his weapons. No one could enter Rome bearing war gear. Antius received each item, making a stack that she guessed would be put away in the trunk: the sword, the red sash around his midsection, the wide leather straps he wore across his chest bearing his medals of commendation. Caerwin shifted uncomfortably as her mind raced ahead to the inevitable conclusion of this process. Surely he wouldn’t… 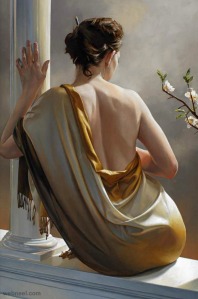 The segmented torso armor clanked as it joined the pile, reminding Caerwin of all the nights she had watched him undress from the comfort of his bed. Or discomfort in the certain knowledge of what would come next. She wriggled on the seat, unable to look away.

Marcellus pulled his tunic over his head. Her mouth went dry. It had been weeks since she’d seen him undressed. He stood in the dappled sunlight in nothing but the cloth that wrapped his loins. The gods! Had there ever been a man of such beauty as this? Muscle curved across his shoulders and chest. A narrow line of body hair descended briefly down his lean abdomen. The wound on his bicep left a puckered red line along the bulge. His hands, his forearms, the line of his jaw…

She licked her lips, absorbed fully in this vision of manhood standing just yards away. Everything about him incited her. Her breath came in short light bursts. Her pulse throbbed in her throat—and in less modest places. Moisture crept between her tightly clenched thighs.

Antius unfolded the long white yardage of Marcellus’ toga then sorted out the tunic with its two red stripes. Marcellus paused, standing fully facing Caerwin and meeting her riveted gaze. She gasped at the unmistakable knowledge in his dark eyes, the slight smile curling his lips. By the goddess Sabrina! He had intentionally positioned himself to disrobe in her view. He had purposefully captured her attention to display himself.

He turned slightly and shifted his hips so that the front of his loincloth gave full evidence of his pleasure in her attention. Her eyes closed in the sensation of him over her. She could feel him in her. She squirmed. Her nipples hardened. Her hands filmed with sweat. She wanted him in ways she’d never known possible.

“What mystery holds your adoration?” Junia said. Her forehead wrinkled as she gazed at Caerwin. “I must know.”

Caerwin’s face heated as she tore her gaze away from Marcellus. Just as he had placed himself in her view, he had also made it impossible for Junia or Porcia to see him. Unless Junia came to Caerwin’s position in the carriage.

“I…It’s…” Caerwin stammered. What could she say? Marcellus meant this for her, not to be shared with Junia.

Against her intention, her gaze drew back to Marcellus. The moment had passed. Marcellus had already shrugged into his tunic and Antius had begun to wrap the toga. “An eagle,” she said finally to Junia. “Powerful animal. Quite beautiful.”

Check out my Roman Pinterest page for some fascinating images and facts about that long lost world.