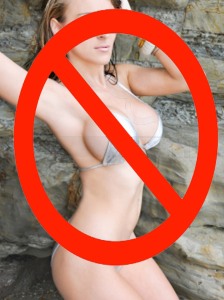 Admittedly, as a female, I expect to experience a different visceral response to men than I would expect toward women, although—I’ll go ahead and admit this—I am bisexual. I’ve enjoyed encounters with women, but most of my sexual experience has been with men. And, as long as you’re hearing my secrets, you can throw it in the hopper that my longest lasting, most heartfelt relationship was with a bisexual man.

Whatever. The point is, I’m looking through all these photos of hunky men and delicious women, and I’m getting frustrated because while there’s a seemingly endless supply of men in all age groups, the overpowering majority of women are young. Young as in thin-hipped, bony waifs.

Now I’m certain there must be just as many sexy older* women out there as there are sexy older men, but these women aren’t popping up on my searches. Which brings us to the obvious conclusion that the appreciation of older men is known and accepted while any potential appreciation of older women is ignored. (*Define older? Above twenty-five, hopefully up to and including sixty—or more. After all, the guys have Sean Connery on their side.)

I can’t burden the shoulders of modern culture with full responsibility for this state of affairs. Biology dictates that the most powerful male will breed with the most promising female. “Powerful” in this context means not only muscular but also confident, socially adept, and in possession of a certain je ne sais quoi, all features of a male older than nineteen. “Most promising” for the female, however, means young enough to be virginal, thereby assuring the offspring carries the male’s DNA. And no matter how sophisticated things might have become in the modern sexual arena, biology isn’t budging.

So women are by nature preordained to look for older men while men are programmed to look for younger women. Accordingly, images of men are produced with women viewers in mind while images of women are produced for male viewers. I acknowledge that it’s possible that the majority of males prefer to see thin waifs, although such a conclusion on my part comes with a truly painful urge to yell “Say it ain’t so, Joe!”

Biologically speaking, aren’t men better served by women instead of girls, by a female with enough maturity not to overdraw the household bank account or leave the baby in its carseat on the car roof as she drives away from the mall? Is it too much to ask that men reward the educated, self-aware, slightly older female with their attentions instead of ogling semi-teens with their buttocks hanging out the ass-ends of their cutoffs?

Probably. I’ve yet to meet a man whose intellect decided when his cock got hard.

Another troubling discovery in my analysis is that while men pose in fairly normal positions, women pose in contortions that would qualify them for a circus sideshow. Men are caught in the act of normal male activity, like smirking, bucking hay, or climbing out of a pool with water dripping off their rippling muscle. Women, on the other hand, cock their heads coquettishly, mince along in crippling high heels, and lean toward the camera with their cleavage crushed between their biceps. What the hell is sexy about that?

Aside from the increasingly popular use of kilts, men stick to regular clothes—or lack thereof—for their hot shots. Women, mostly not. High fashion for men is that stunning look of a nicely tailored suit. High fashion for women is duct tape, plastic wrap, or pieces of metal. Gee whiz, really?

Okay, maybe I’m exaggerating slightly. But only slightly. Men’s attire complements his manly pursuits to be strong, athletic, in command. Women’s attire serves to render its wearers helpless. What woman can function seriously in six-inch heels with hair obscuring her vision and a neckline that directs all attention to her cleavage?

Can’t someone please make some different choices here? Break away from the herd, photographers. Give us some women with some chops, some life experiences etched on their features, some sag in those real breasts. Give us a few strands of gray in her curling tresses and a direct look that says she knows where your buttons are and she’s willing to press a few—if you’re man enough.

3 thoughts on “No Girls, Please”